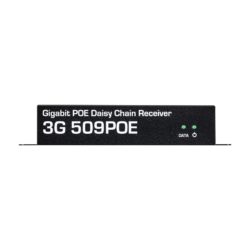 The Just Add Power VBS-HDIP-509POE Receiver is designed to add an HDMI Output into your video system. This receiver is capable of 4K30 4:4:4 with HDR.

The receiver is powered by POE but can optionally be powered by a power supply.

An ethernet loop out is included allowing you to provide additional video to more J+P receivers or basic internet to a networking device.

The 707POE transmitter supports all of the lossless audio formats which includes Dolby Atmos. It can pass them on to the 508POE or 518AVP receiver.

Ethernet Loop to power another receiver or networking device.

The 509POE features an ethernet loop out. This can be used for a few things.