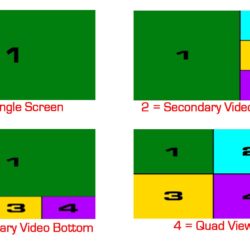 One 2G+4+ Tiling Transmitter allows you to watch up to four HDMI sources at the same time on a single display in a variety of viewing modes, including quad view, picture in a picture, and picture on a picture. You can also stack up to five 2G+4+ units and, as a result, actually view up to 16 images simultaneously on a single display. Additionally, an HDMI pass-through port on the 2G+4+ Tiling Transmitter allows for distribution to a local mirrored display.

The 2G+4+ Tiling Transmitter is built around a powerful SOC scaler that enables a wide range of new applications for Just Add Power users. This includes support for Alpha Blending, PIP, POP, Tiling, Flip, Rotate and Chromakey commands. Each 2G+4+ Tiling Transmitter has four 2G receivers built in with one 2G+AVPro HD/IP post-mix transmitter that puts the tiled image onto the network switch, making it available for every integrated screen in the building. The 1U 2G+4+ chassis has a modular design for easy maintenance and can be mounted in ten different ways.

Whether you are in a residence, or at a sports bar wanting to watch four games at once, a video production operation needing a flexible switching solution with fades and seamless switching, or you are operating a digital signage system and wish to boost revenue by blending content with other live video sources, 2G+4+ can deliver a high quality HD video viewing experience.[/